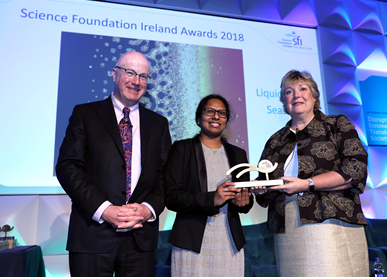 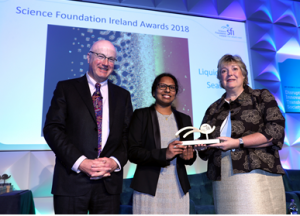 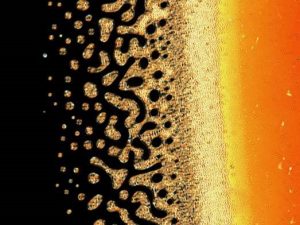 The award was presented to Sithara by Director General of Science Foundation Ireland and Chief Scientific Adviser to the Government of Ireland, Professor Mark Ferguson.

Sithara won the award for her image, ‘Liquid Crystal Seashore’,

The microscopic image shows sea shore like feature in the liquid crystal (LC) material at the isotropic to nematic phase transition. This seashore like feature is developed in a temperature gradient LC cell made up of two glass substrates. In the region, like water bubbles near shore, is the thread like defects that develops at the isotropic to anisotropic transition temperature and these defects are the proof of uniaxial nematic phase transition. The part in yellow colour, looks like shallow water, is the pre-transitional region just below the conditions for phase separation of anisotropic nematic where molecules are slowly possessing orientational order. In the region in orange colour, looks like deep water, the orientational order of molecules are spontaneously arising below isotropic to nematic phase transition. The colour of the image depends on the temperature, shape of LC molecule and sample thickness.